Pearland Speed is the newest track club to the Pearland area, but rest assured that the foundation for its beliefs are rich in the tradition through its founding members. We are a 501c3 non profit organization. 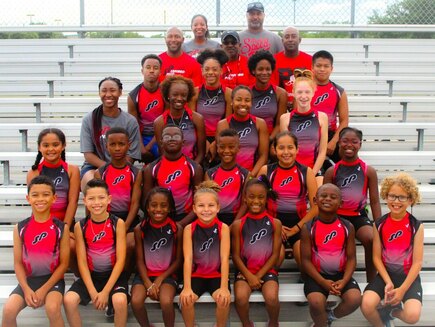 Pearland Speed is a youth track club in the Pearland area. 2023 marks the club's eighth year in existence but rest assured that the foundation for its beliefs are enriched in the tradition of success through its founding members. Since our formation Pearland Speed athletes have competed at the AAU National Junior Olympics, High School State Championships and gone on to Collegiate track teams.

We are a 501c3 non-profit organization. Coaches and parents have three principles for which they believe: Train athletes, teach discipline through sport and make sure that the athletes have fun. Pearland Speed’s success begins and ends with YOU!

Pearland Speed participates in both USA and AAU track and field meets throughout the city. We also participate in major track meets around the United States for maximum exposure. The sky is the limit for Pearland Speed.  Thank you for allowing us to help your child develop their SPEED within.

The foundation of Pearland Speed is built on three principles that parents and coaches believe:  Train athletes, teach discipline through sport, and make sure that all athletes have fun.

Dedication, Determination, and Drive!  We believe that the Dedication of parents and the Determination of athletes will Drive the success of the track club.

Let us help your child discover the SPEED within!